The votes have been tallied and despite some unsubstantiated cries of voter fraud, Vermont Harvest of the Month (HOM) is proud to announce its incoming freshmen class for the 2016-2017 school year: sweet potatoes, maple syrup, and radishes.

Considered by many to be an elite class of Vermont Harvest, the cream of the crop, HOM representatives are featured each month as a way to celebrate the sprawling and beautiful agriculture produced in the state of Vermont. From the new class, sweet potatoes will be representing the month of November, maple syrup representing March, and radishes representing May. In a surprising decision by the election board, Swiss chard, which garnered a respectable amount of the vote, was granted an apprenticeship until the 2017-2018 school year when it will begin representing the month of September.

“I am honored to be able to serve Vermont Harvest of the Month and I promise to be the hardy, resilient, yet sweet, harvest you expect me to be,” said sweet potatoes during its victory speech, “It’s crazy to think I will be joining the likes of some of my personal heroes, like summer squash and parsnips; dreams do come true.”

However, the election wasn’t without its controversies as candidates vied for the votes of Vermont Harvest of the Month celebrators. While maple syrup did emerge victorious against celeriac and turnips it did have to combat vicious rumors calling into question its Vermont citizenship.

“Today is not only a victory for maple syrup in Vermont, it’s also a victory for common sense,” it said upon learning of its narrow win in the Vermont Harvest of the Month election, “As a true Vermonter, no matter what some may still be saying, I promise to represent our agriculture heritage to the best of my ability.”

The main perpetrator of the maple syrup “birther” allegations was celeriac, a knobby celery-like vegetable which made a name for itself this election cycle due to its, mostly false, inflammatory remarks that seemed to captivate likely voters. Its unlikely lead in the early polls seemed to fuel more off-the-cuff remarks as the election season continued. At one point, the misshapen root vegetable went as far as calling for a complete ban on kale in all gardens and farms across the state; a statement widely repudiated by the other candidates and credited for its eventual fall from grace.

“Initially, it was a very dirty election,” says Shane Rogers, communications, outreach, and development associate with Green Mountain Farm-to-School, one of the partner organizations who runs Vermont Harvest of the Month, “But then we washed all the harvest candidates in a rinse basin and it was fine.”

As the incoming freshmen class readies itself for the 2016-2017 school year, the current Vermont Harvest of the Month representatives are working hard to help Vermonters celebrate its state’s amazing agriculture.  They can be found working in classrooms across the state, teaching kids about nutrition and healthy food choices and will be featured in a workshop during the upcoming NOFA-VT Conference in February, “Integrating Vermont Harvest of the Month in your Communities, Schools, and Businesses.” 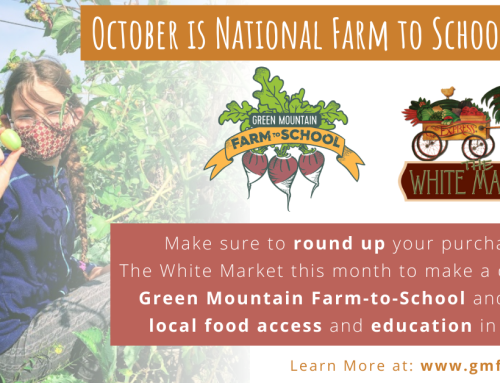